At 9.30am on 25th March, a cool and bright Sunday morning, we found that Phil had already set up and made himself “at home” having dusted off our antique kick wheel which had been hiding “in plain sight” in a corner of the Club Room for yonks. Also set up was his Gnome slide projector, straight out of the TV documentary “The Collectors”. Both early indications that Phil never throws anything away if he can utilise it, of which we were to see more!

Shortly after 10.00am Phil kicked off our first workshop for 2012 with a tip for making your own cutting wire. Securing an end of a length of fine fishing line to the centre of the wheel head with a lump of clay, he held the other end aloft and rapidly spun the wheel until he had enough twists in the line. He then held it by the centre and brought the high end to the low end and, on release from the clay anchor; the two strands twisted themselves together. All that remained was to attach handles to each new end and, Pug Mill “Eat your heart out”! Other tips he shared were his “vent less” bat doughnut and the soft chuck he threw on the kick wheel to accommodate, without tress, different sized rims of pots inverted for turning.

Then, using his “clock spring” tool, he rapidly turned feet on some pre-thrown bowls, all the time keeping up a patter of anecdotes ranging from the superiority for turning of clock springs, “scarce as hen’s teeth”, to his activities as a “house husband” which allows him to be a gentleman potter, freed from the pressures of the production potting that he did in earlier years.

Turning to his advertised topic, Phil showed us why the kick wheel, with it’s gentle, controlled action and extra height, was better for the slow inscribing of patterns into the leather hard clay. He brought the pots up to eye level with various; ready to hand “platforms”, that sometimes seemed precarious but nothing fell over!

Having completed the carving (difficult to show in a photo), layers of slip were applied and left to dry while other, smaller pots, are treated to patterns made with liquid wax. Note the drying pot is also a plinth!

Most people took a short break for Morning Tea and biscuits but Phil continues applying slip and sipping occasionally from his rapidly cooling coffee.

You see him here painting lighter slip into grooves to provide contrasts in the final pattern, all the time keeping up his explanation of his actions and tips about his techniques and occasionally calling for help with jokes from the audience!

After a BYO Lunch around 1.30pm, when Phil did stop and join us for a bite and some informal chat, he proposed his slide show and commentary while the slip and wax dried in preparation for the next stages.

The Gnome projector (left) was not without old-fashioned charm and worked well with the magazine shown but when it came to the next batch of slides in the spare it balked! After a few anxious moments Phil swapped the new slides into the “good” magazine and we were off again through Phil’s entertaining tale of his beginnings to the present via various styles of pots and decoration. He has now vowed to convert his slides to digital!

Although he advised that this final stage be left a bit longer to avoid the risk of “accidents” while scraping back, he had to press on as we were running out of time.

Here you see him with either a metal kidney or his other favourite makeshift tool, the credit card – preferably out of date and cancelled! While he used both, he preferred the card for its flexibility and “softer” touch allowing him more comfortably to remove only what he wanted. Having finished this pot (not shown here – there was scraping still to go) Phil had the smaller wax resist pots to clean up, very carefully with a sponge, and, while they didn’t have the impact of the carved design, they had a subtle appeal all of their own. And so, with decorating at an end, we gave him a standing ovation to which he responded with an encore in the shape of a handle-pulling demo! As he explained, while expertly “milking” his lump of clay, this was a skill he had learned in production potting days when he just made handles for other potters’ pots.

Handles can be fixed to the pots in two ways. Phil is here showing the one that is most secure by which he means that when you knock it, the handle breaks but both ends stay attached!

And so a most enjoyable and informative day came to an end. All agreed that Phil’s relaxed style and informal, yet action and information packed program, added up to a great social and learning combination. 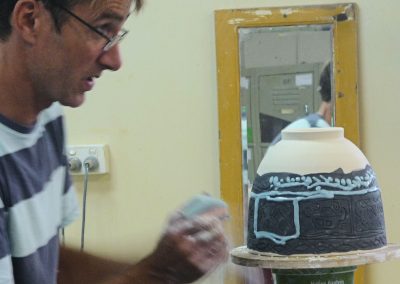 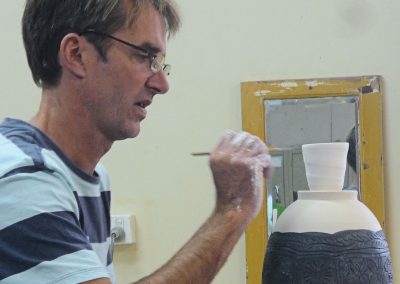 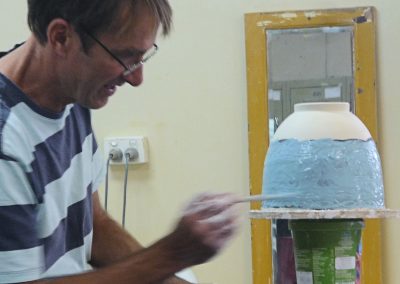 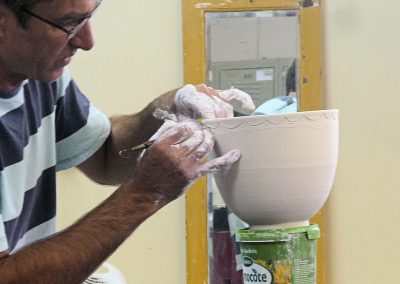 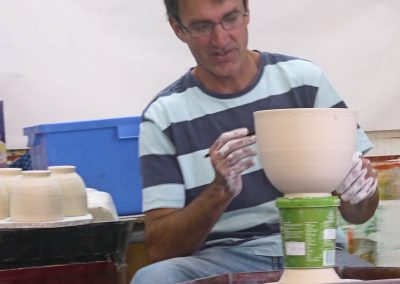 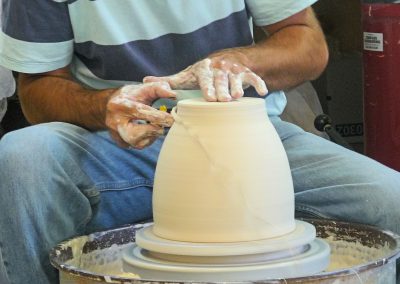 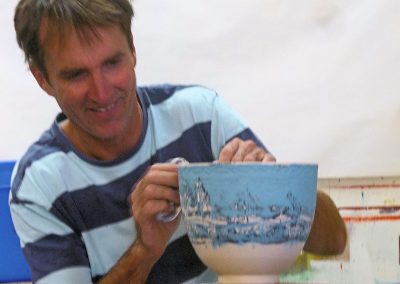 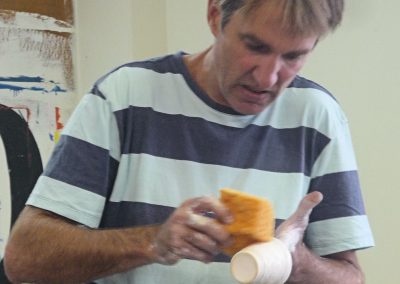 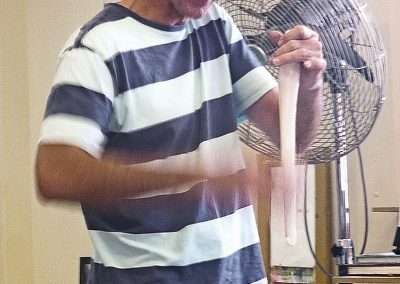 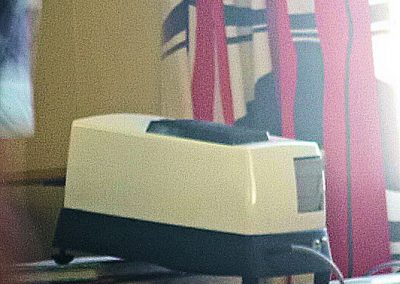