In spite of the fact that the workshops ran from 1.00 till 4.00 in the afternoon, 8 keen participants were gathered around the gas kiln at 9.00am on Sat the 15th eagerly awaiting Paul’s demonstration of loading and firing the fiery monster. In the first week we had been to “school” (in the Clubrooms) where Paul had illustrated with blackboard diagrams the internal architecture of the kiln and pathways the draught and the flames would take. We also saw graphs demonstrating the “magic” of eutectics in the heating and cooling process that reduction would take advantage of.

Now we watched and took photos as Paul carefully loaded our pots and explained why he staggered the levels and placed small and large pieces strategically to ensure the flame flowed around all the ware before escaping up the flu.

Here we see the loading at about the halfway point showing the beginning of multiple staggered levels and the channels designed to guide the draught and the flame and here we see loading completed.

Notice the cones placed both at the top and the bottom. There were also others at the back and they all bent the same! Indicating that the heat was distributed evenly throughout the kiln. But we are jumping ahead! The door was closed and the pilot jets, first one side and then the other, were coaxed into producing the right flame to gently heat the space and the flu so that a draught was created. As soon as the pilots were turned up to full, the all-important firing record was begun. Every adjustment to burners and the damper as well as temperature increase and atmosphere changes were accurately recorded in the Kiln Log for as Paul says repeatedly, “You can’t replicate a firing without accurate and detailed records”.

As soon as steam ceased coming off, the main burners were lit, first the rear and then later the front. These were turned up slowly and progressively and we watched the temperature rise and listened to the kiln as it started to “work”. At 960 degrees Paul turned both burners on to full and eased the damper in 2.5cm. Then he eased out the top spy-hole bung (with gloves on!) and flame licked out searching hungrily for oxygen! We were in REDUCTION!

This was the time for waiting, watching the pyro carefully; and looking quickly though the spy-holes for changes in the atmosphere as well as keeping an eye on the cones. Paul eased the damper out at 1224 degrees thereby ending the reduction as cones 8 and 9 were bending. At 1253 with cone 10 down Paul started the cooling process. This was at 7.50pm and he cooled the kiln for an hour before turning all burners off and going home! We had all gone at 4.00pm, the official end time for the workshop, though we had been there since 9.00am. But then so had Paul! And so ended Week two and firing stage one.

At 1.00pm the following Saturday we were all there, waiting with baited breath for the unveiling, the “moment of truth”! You mean no one took a peak during the week? What! Us? Never! So it was a pleasant surprise for us all when Paul took off the latches and swung open the door. But, we weren’t allowed to touch yet! Paul was so excited that he had to emphasize again that it was “All about the cooling!” And we were very impressed – but we did so want to get hold of those pots! Then, because we had been very good boy and girls, the unloading and the post-mortem began.

Here we have a shot taken so that, comparing it with the similar shot, (No. 2 on page 1) we have a “before and after” look and changes can be easily seen. Each pot was carefully removed and passed to its owner and Paul described what had happened to it and made suggestions about the suitability of the glaze for reduction and ideas for next time. And we all admired each other’s work as all good potters do. Eventually we returned to the “school room” and Paul got us to look at our glazing under a powerful microscope that revealed the beginnings of colour changes, which he explained in terms of the physics of eutectics and chemistry. Here he is seen demonstrating a computer program designed to take the hard work out of designing and mixing your own glazes for reduction, from scratch.

And so ended a mind blowing series of workshops in which theory and practice were combined such that one supported and informed the other and left you with the satisfaction of knowing that, not only did you now know how to do it, but also why you did.

Thank you Paul. You are a born teacher though it wouldn’t have paid as well as your real job. 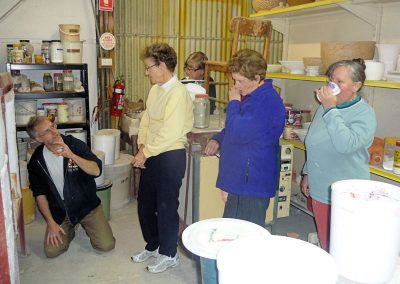 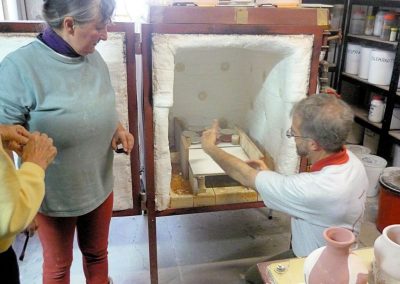 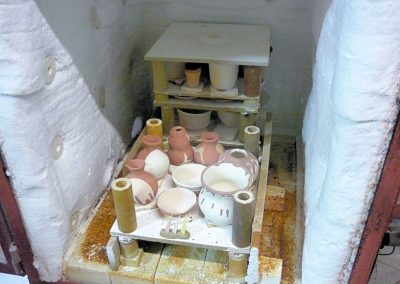 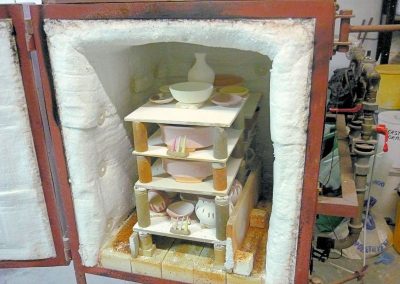 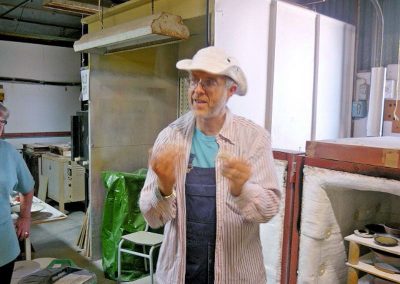 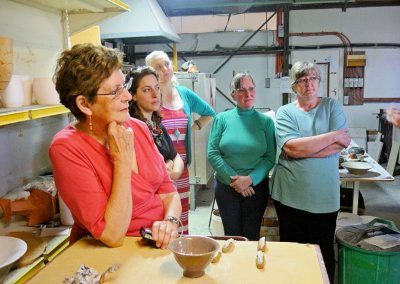 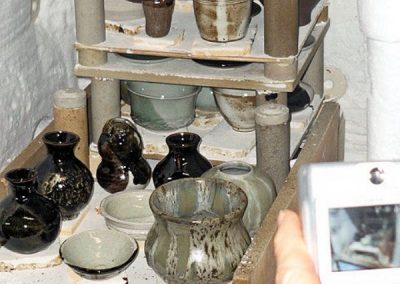 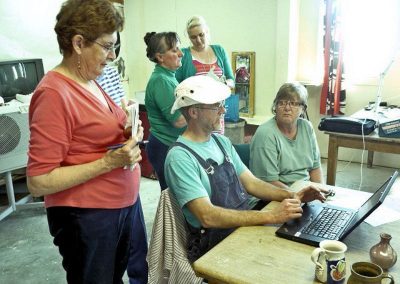